On February 25-26, 2017, PyCon PH, a community conference intended for collaboration in the Python developers community, held its annual Python Conference. The goal, as stated in their website, is to provide a venue where the Python programming language and surrounding technologies can be explored, discussed and exercised. For the first time in the history of PyCon, the conference is held in Cagayan de Oro City, with Mindanao University of Science and Technology as the host institution. 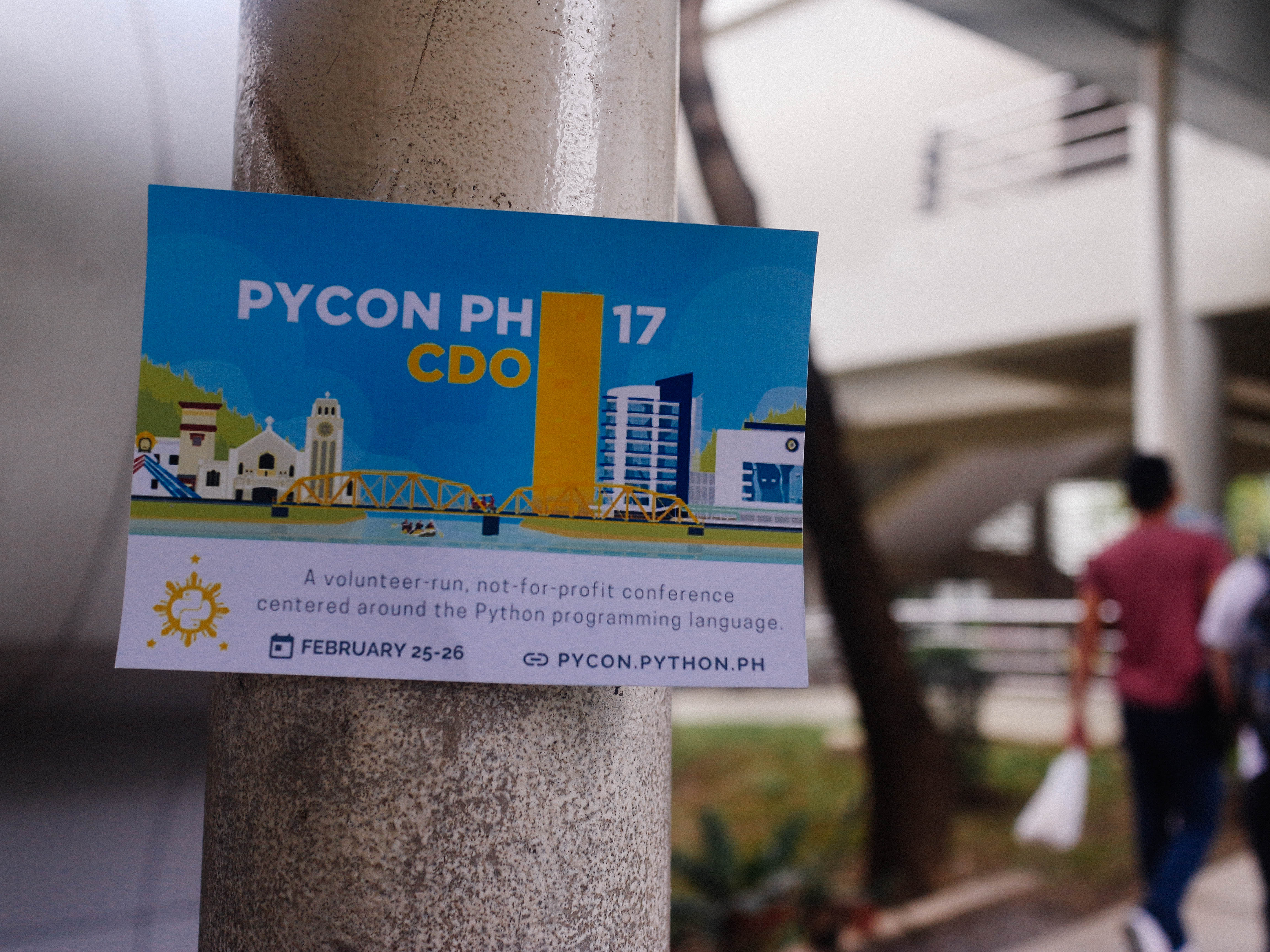 Two of our Ingeneers - Diomari and Lorence, was fortunate enough to attend the said event, focusing on the different applications and newest innovations in the world of Python development. We've managed to sit with them for an interview detailing their experience althroughout the two-day event.

So, how did you discover PyCon, and what made you decide to join?

Diomari: Actually, I have always wanted to attend PyCon, 'cause I was curious with what happens during the event, with what we can learn. It just happened by chance that I was browsing through Facebook, and then noticed a group promoting the event. I was shocked that they're having it in CDO! I was thinking that these conventions are usually held in Manila, and finally, it's being held somewhere near us, so maybe now's the right time to go and attend. Right then, I made contact with the company if they can sponsor my participation.

Lorence: As for me, I already knew about that event ahead of time, but I was hesitant 'cause I don't want to go alone. Then, when I found out Diom was going and got financial support from the company, I made requests of my own.

The event was held in Mindanao University of Science and Technology in Cagayan de Oro City. How did you find the venue?

Lorence: The place was really nice. The auditorium looks great - especially the chairs with the cool armrest. You know, the ones where you can adjust and hide the desk arm, then put it back whenever you need it. I find that amazing! Though it may feel alarming at times, since the area is known to be flood-prone, sometimes deeper than what we can normally manage. Good thing it never actually rained when we were there.

Diomari: It was actually my first time in Cagayan de Oro. I'm not sure about Lorence, though; I feel he's been there a lot.

Lorence: Yeah, I've been there a couple of times.

Diomari: It was also my first time in MUST. It was actually, for me, comparable to Ateneo, in a sense that the area is relatively huge. And, just like what Lor mentioned - the auditorium. To be honest, it is not that big, which, to its advantage, makes it more intimate. But since there were not much people who attended as well, if you are to look at it, it didn't s eem compact. It felt cozier, actually, if you ask me.

Diomari: Ah yes, they set up multiple projectors within the area, so that those sitting on the sides won't miss out with the speakers' talks.

Lorence: How it was set up was somehow circular, with four projectors. 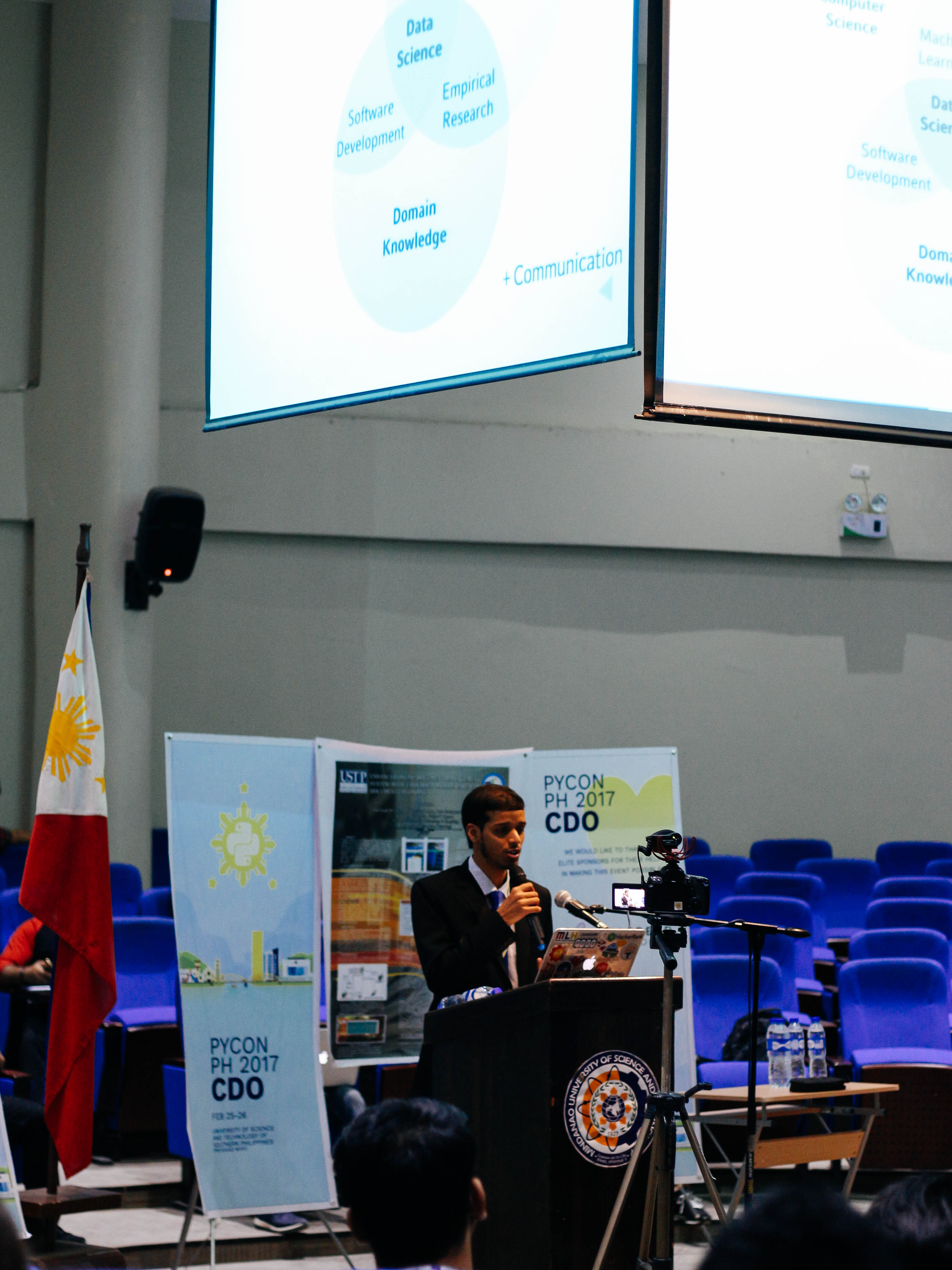 How about the people who attended the event? How was the experience being with them?

Diomari: It was like a nerd fest! Can I actually say that? *chuckles* Honestly, I felt intimidated at first, since it was my first time to join PyCon, and, based on what I observed, most of the participants are professionals who actually knew what they were doing. They may look unassuming, but you would know that they are well known in their respective fields; they have already contributed a lot for the community. Yeah, at first, I felt intimidated, but later on, I felt more comfortable, since most of them are quite friendly and fun to be with. We have actually made some new friends. It was fun!

Lorence: The people there are amazing! I was also impressed with how big-time their speakers are. We learned a lot from them, not just with Django - the framework that we are used to, but with the whole other usage for Python. You see, the scope of Python is quite wide. It's not just limited in web development, but there's also big data, micro-Python, and such. Python is such a vast topic. You can actually use it in engineering and even in farming! With how vast a topic Python is, that is also how diverse the type of people you would be able to meet in the event.

How did PyCon change your perception about the Python community in the Philippines?

Lorence: As what I just said, you would realize that with how much you currently know, say, you are very much confident with your Django skills, once you step foot in the event, you will soon find out that it is actually just the tip of the iceberg. There so much more about Python that you can still learn and tackle. We, with our knowledge and skill set, is just a small percentage of what the Python community is in reality.

Diomari: Similar sentiments with Lorence. My expectation with the event was that I would learn a lot more about Django and web-related stuff. Though, yes, we indeed learn more about it, like, they were able to discuss Flask, REST API, and the like. But, it didn't really meet my expectations, though somewhat in a good way, due to how vast and diverse the topics that was introduced. It was fun 'cause you were able to learn something new, and we have been exposed to some new and interesting stuff about Python, but then again, we knew that in our field, somehow, not all of them would be applied for practical use.

In your opinion, what was the most interesting topic or discussion in the event?

Lorence: For me, it would definitely be the one on "Writing Idiomatic Python". It's not really in-depth and technical but its importance is undeniable. Remember we mentioned how vast Python is, in terms of its purpose? Well, this topic is something that would encompass all potential Python usage. So, all audiences, regardless of what field they are in, can relate with it.

Diomari: Same for me - the Idiomatic Python. We are so happy that the speaker was generous enough to give free copies of his book to us. This means that his talk is not our only takeaway, but, now, we already have some sort of reference that will be useful whenever there's a need for us to write efficient Python codes. 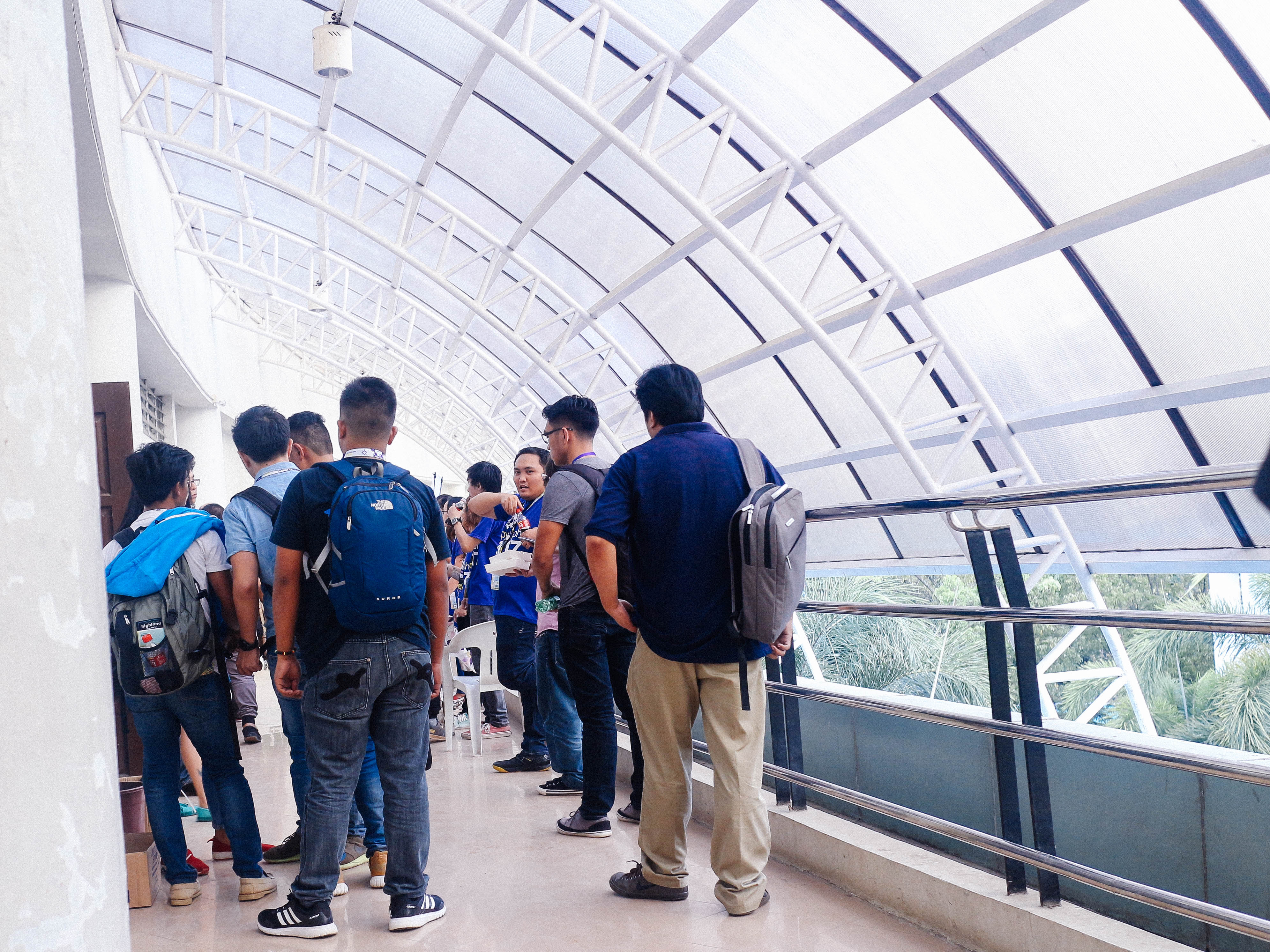 If there was one special insight or learning you gained from the event, what would that be?

Diomari: For me - I have so much more to learn. Python's ecosystem is so huge that your knowledge, no matter how long you have been working in that field, is relatively minute. There might be times that you may pity yourself, saying, "God, I only know so little!" But, you should never allow yourself to stop learning about Python, no matter how small a peck you are compared with its vast scope.

Lorence: I would have to agree with Diom. It’s important for us to continue learning more. But, at the same time, as what Pat, one of our fellow participants, mentioned while we were hanging out after the event, "Do not belittle your self too much." 'cause there are some developers who might be quite an expert in one field, but still has a lot to learn in another. Like, for us, we might be good in Django, but we're not familiar with the others, such as Big Data, etc., while there were others who are good in these fields but are still to experience coding in Django.

Any final message for those students and professionals who are interested in learning more about Python?

Lorence: Never stop learning. If there are new technologies and applications, don't be afraid to try it. Explore more on innovating things - on your current field or those you are interested to delve into. Take on the challenge.

Diomari: Don't rush when it comes to learning. It's also important that you are having fun while learning, because, like what I've said, Python's ecosystem is quite large. There is a huge chance that, though right now you are, say, in web development, but later on you might find yourself enjoying on other fields. Also, don't forget to practice by using the best practices available. So, yeah, that's it. Don't rush - enjoy every moment of it. You're on the right path.

Witches. Superheroes. Xander Ford. They're all here! Join our Ingeneers for this annual boo-season festivity. 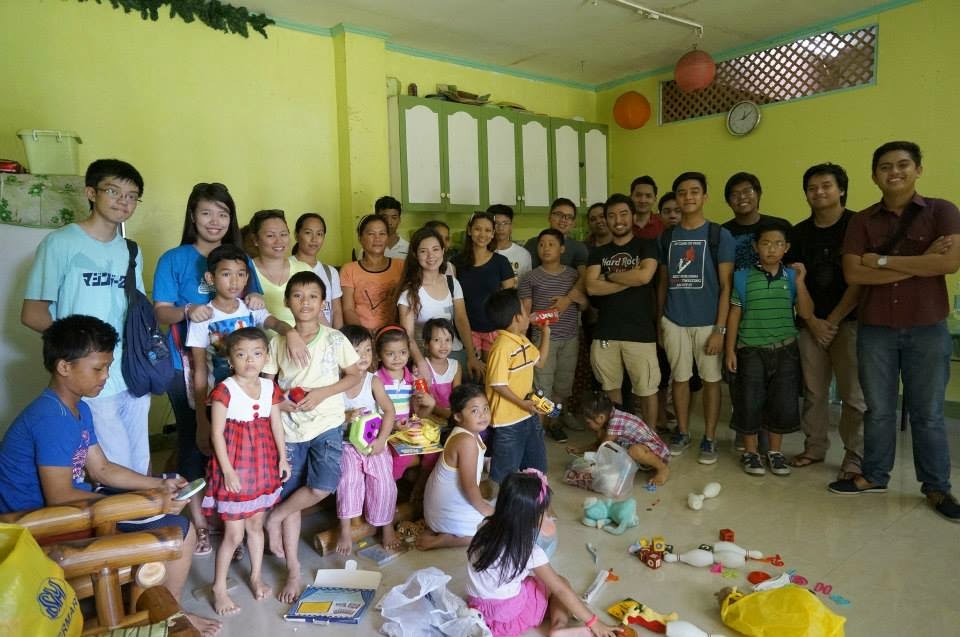 On the Saturday before we were all to take a break for Christmas, we went to the Harvest House Children of Christ Orphanage in Tibungco, Davao City bearing our little gifts for the kids who live there.

We've asked our dear Ingeneers on what specific stereotypes about IT professionals they are tired of hearing. Here's what they've got to say. 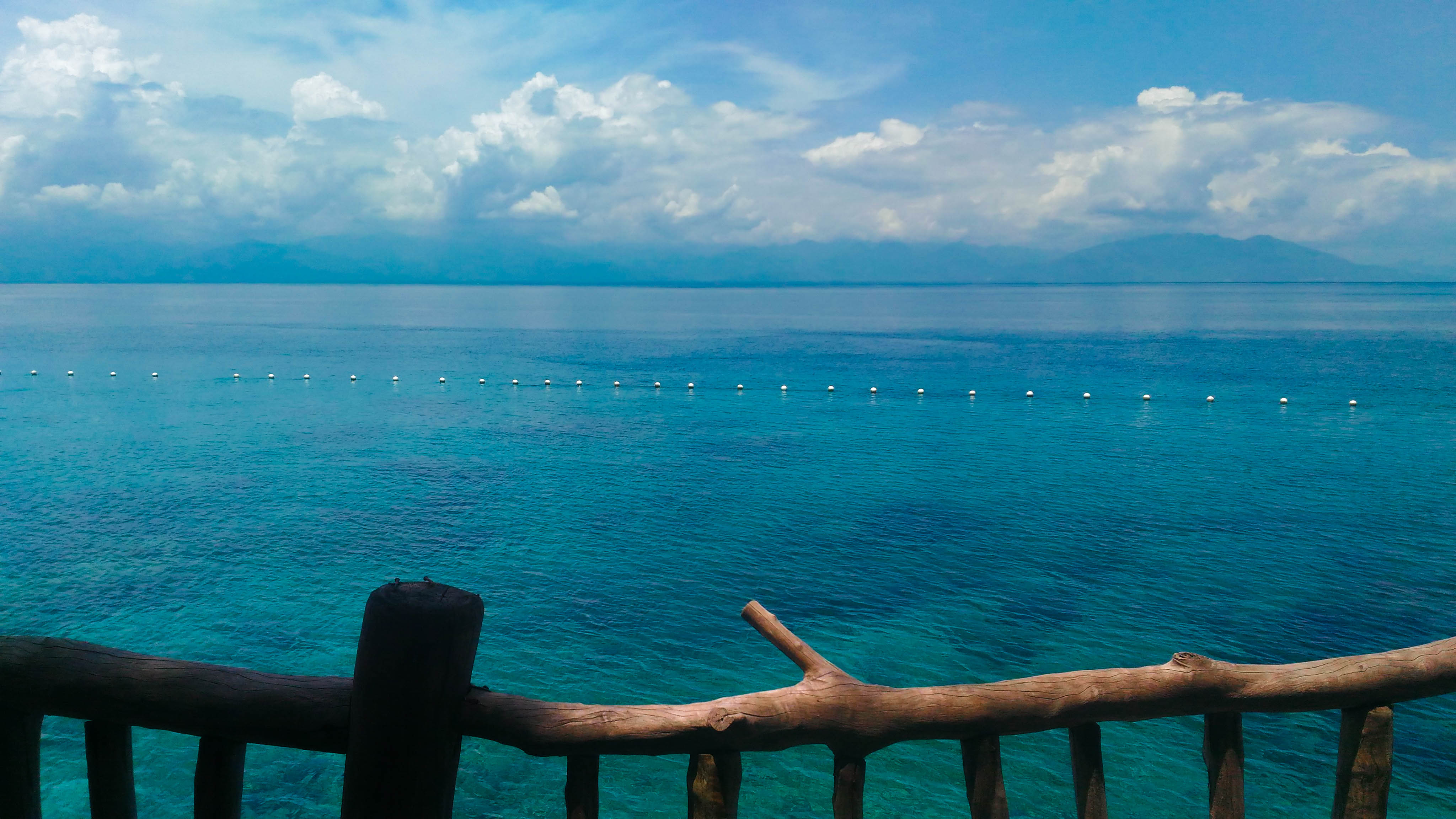